We have been given the wonderful opportunity to give inmates Christian radio who do not have their own personal radios. Since 2006 we have been placing solar-powered transistor radios equipped with earbuds into the Florida State Department of Corrections prison systems in our listening area. We actually were first given as a pilot test program the Wakulla Corrections Institution to see how the use of these radios would go. It went so well that Faith Radio was given permission to place these transistor radios in several State prisons in our listening area. 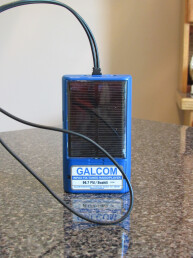 These radios are pre-tuned by the company who makes them, Galcom International, to only transmit the Faith Radio frequency. No other radio station can be listened to on these radios. They never need batteries because they are solar-powered; inmates just set them in the sunlight for charging. The State of Florida requires that we provide earbuds for private listening. We occasionally have to resupply radios and earbuds as needed.

Our listeners provide the funds for these prison solar radios. We affectionately call these radios "mini-missionaries." A fund for this project is on-going for more earbuds and replacement radios or additional radios to place in other prisons or in greater numbers in existing prisons.

It is amazing to hear back from inmates. We often receive letters from prisoners.  In fact, we are sometimes humbled by financial gifts from prisoners; who would expect it? We believe the message of Faith Radio is invaluable to inmates, likely bringing great change in prisoners’ lives. Talk about rehabilitating prisoners! The work of God in an inmate's life can bring about lasting change. We also on occasion visit and do ministry in the prisons. It is always exciting to meet the inmates who have written to us. Faith Radio continually participates in prayer with other local prison ministries like Harvest of Life and Gospel Express.

Here are some other models of the Galcom solar-powered radios: 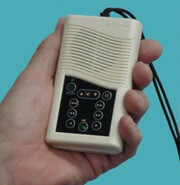